The Earth from Afar 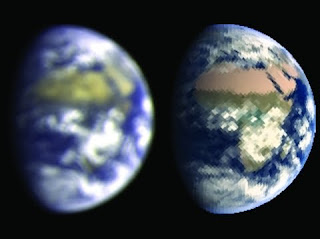 What would our planet look like from afar? Would it look the same if it was closer into the Sun or even if it was orbiting a different type of star?
A team of scientists aim to answer these questions with a model.

A network of scientists brought together by NASA form the Virtual Planetary Laboratory (VPL) and their goal is to use computer simulations to test what a habitable planet looks like over time.
The model integrates a number of factors that cause a planet to be habitable such as; geology, atmospheric parameters and its position relative to other astronomical bodies such as its star.
The task is by no means an easy one as the model will need to reflect the complexity observed of Earths system.

The current count of exoplanets is over 600, most of which are large gaseous worlds. There are, however, a number of Earth like candidates and with missions like NASA's Kepler Telescope which is hunting for exoplanets around solar-like stars or NASA's future planned Terrestrial Planet Finder (TPF) mission; the number of potentially habitable worlds is set to rapidly increase (potentially, being the operative word in that sentence).
This, however, still means that these planets will be viewed as point sources. Where dimensions are inferred and any information about atmospheres concerns the whole planet and not individual regions or clouds.

This is where computer models come in! Observational astronomers will be able to tell you what we can see, be it a signature for water or just an average temperature. Models are then used to determine the possible planetary and atmospheric structure from the data which increasingly requires more complex models with more informational parameters.

The VPL teams model is designed to be a complex model of the Earth as viewed from afar where the atmospheric, and geographical parameters are displayed over the whole planet (in essence it is an extremely pixelated view of the Earth). It also includes a number of changeable astrophysical parameters such as different wavelengths of light, if orbiting a different type of star, and the observation angle, to determine the effect of light off of oceans.

With the collaborative work of a number of teams like this and observations made around the world and from space we may be able to find another Earth.


http://www.ncbi.nlm.nih.gov/pubmed/21631250
The image was taken from the paper written by the VPL team

If you wanted to know how to look for Earth-like planets and other solar systems, or just want to explore the galaxy of worlds out there; this is the book to read.

Ray Jayawardhana is a professor and award winning science writer and when reading Strange New Worlds you can see why. The book takes you on a path of discovery from the earliest ideas about exoplanets to the most up to date findings in the rapidly advancing field of discovery and classification. He easily explains the different methods used for exoplanets detection while pointing out the hardships taking the reader through a journey of the scientific process.

It is also a fantastic story of collaboration with credit given to amateurs and academic, graduate students and professors. He also includes some personal insight from his own early discoveries and takes the reader through the excitement of discovery through to the rewards of publication.

This Popular-science book brings you up to date ideas in one of the fastest moving fields of research today. It does not skimp on the scientific details but puts the reader in a position of easy comprehension. The chapters are short with a number of sub-chapters that outline the past, present and future of exoplanetary discovery clearly with compelling descriptions and fantastic storytelling.

It is a refreshing read that presents the most up tp date ideas in a new but increasingly expanding field of research. You will not be able to put it down.

I whole heartedly recommend this book. It is a true journey that fits remarkably well with the iconic words of Captain Jean-Luc Picard in the opening credits of Star Trek: The Next Generation.

“… Its continuing mission: to explore Strange New Worlds, to seek out new life, and new civilizations. To boldly go where no one has gone before!”

You can by Ray Jayawardhana's Strange New Worlds on Amazon
http://www.amazon.co.uk/Strange-New-Worlds-Search-Planets/dp/0691142548/ref=sr_1_1?ie=UTF8&qid=1316778022&sr=8-1
or at waterstones
http://www.waterstones.com/waterstonesweb/products/ray+jayawardhana/strange+new+worlds/8416948/
Posted by Hannah Wakeford at 12:44 No comments:

Is Kepler 16b George Lucus’ Tatooine?

NASA’s Kepler Mission team announced today that they have detected the signature of a planet orbiting a binary star system. Was George Lucas’ alien image of a double sunset on Tatooine in Star Wars IV genuine scientific foresight or just a matter of cinematic depiction?

The binary system is 200 lightyears away in the direction of Cygnus (the region where the Kepler planetary search is focused). Binary stars are common in our galaxy, as well as many others, and the term merely describes two stars that orbit each other. In this case the two stars are orbiting each other in a period of 41 days and at a distance within that of Mercury’s orbit around the Sun.

Unlike the stars depicted from Tatooine the two stars in the binary system are very different to each other and both are smaller and dimmer than the sun. The larger star is 69% the mass of the Sun; glowing a deep orange and is 100 times brighter than its dim red companion star which has a mass just 20% of the Suns.

The Kepler lightcurve also shows that the stars are active; this means that we can observe large starspots on their ‘surface’ (starspots are cooler regions of the stellar atmosphere and appear as black dots on our own sun).

The planet is in a wide orbit around both of these stars with a period of 229 days and a nearly circular orbit. This orbit means that it feels the gravitational pull of the two stars as one single point. The planet is a cold, gaseous world similar to Saturn and is not thought to harbour life.

The dynamics of the system, or any binary system, means that the area (like the one we live in) around a star known as the goldilocks zone or the habitable zone is a dynamic one. The temperature change due to the two stars orbiting each other would have an effect on the planetary temperature as well as the change in light due to an eclipsing binary system and the differences in the stars themselves would mean that the light from the two ‘Suns’ would have different effects on the planet and the seasons as we know them would not exist.

This would most clearly be seen in the sunset as Laurance Doyle said at the Kepler press conference earlier today the whole process is dynamic. At some point they both might set together, or one may set as the other rises, or there may be only a short difference as seen in the shot of Luke staring out across Tatooine. He concluded the thought by saying that, “If you wanted to tell time on Tatooine with a sundial you'd need to use calculus”

So, unfortunately there is not much chance of standing on the surface of the planet gazing like Luke Skywalker out at the double sunset while being serenaded by John Williams.

This system may not be the Tatooine that George Lucus dreamed up but it is a huge step forward in the hunt for habitable exoplanets as most of the stars we look at up in the sky are in fact binary systems. And if we can find one planet orbiting two stars that is dynamically stable you can bet that we are going to go out and look for some more. 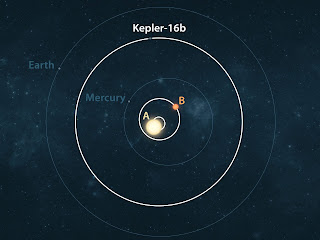 If you want to go looking for Kepler 16b you can find the star system with a magnitude of 11.5 in the right wing of the Cygnus constallation.
Posted by Hannah Wakeford at 20:11 No comments:


Where once we had the space fairing imagination depicting solar systems and space ships, we now have homebound technology and parallel universes.

The imagination in Sci-Fi seems, like all things, to move forward. This itself would never be considered a bad thing; but is it moving away to fast have we finished telling the stories of space adventures too soon?
It is all well and good that new shows from extraordinary imaginations are depicting a more quantum universe with time jumps and parallel worlds but are we ready to entirely move on from space travel and the adventure of whole new worlds to discover.
The last in over well over two decades worth of space fairing Sci-Fi series ended this year, also marking the end of the nearly 15 year run of the Stargate franchise. Stargate Universe followed a group of scientists, military and civilian personnel stranded on an Ancient ship called Destiny. Destiny takes them on a course through solar systems across galaxies following a path back to the birth of the universe.
Though the Stargate franchise is the only space fairing franchise among many (star trek, star wars, Battlestar Galactic, ...) to depict/suggest real-time travel between galaxies many other shows such as BSG, Farscape and the short lived series Firefly have been 'seeded' from Earth and inhabit systems within the milky way. Others like Star Trek look at the whole galaxy and the endless number of world within it forming regions of political and/or technological differences that present the mired of story lines depicted over its 5 series' and a total of 11 movie run.

I feel, or rather i have noticed that with increased knowledge of real life exoplanets, we are now in some cases able to take spectra and determine atmospheric properties, there is a decrease in the number of shows creating stories around their discovery and origin. Have we reached a point in our knowledge of exosystems that we feel any story would be farfetched or not able to be rooted in reality as we had once hoped? With the discontinuation of the Space Shuttle should we be turning away from telling stories of space ships? In my opinion, NO, now is the time where space exploration in Sci-Fi should be taking off we want new ship designs we want to know what types of world we can imagine and as we have seen most of the world found outside our solar system are far beyond our imagination we have to do a double take and question what we know. Those gifted with the extraordinary imaginations that brought us Stargate and Star Trek and all the other amazing show i do not have the time to list here have all these real world stories to follow and take those of us without such gifts on a journey with them and the characters they create to these other worlds.

I do not think that we should throw space exploration entirely over to factual discovery, not yet at least.
Posted by Hannah Wakeford at 17:18 No comments: