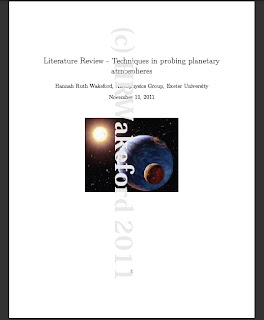 You know the song was right it is a very good place to start!

I knew for a long time that I would end up doing a PhD as it seemed like the natural course for all the careers I could think of. However, it was not until after I got my acceptance letter that I sat down and asked myself the ultimate question. What is a PhD? And to tell you the truth I am still not entirely clear on the answer to that.

As a PhD student, although you get paid, you are still that; a student. Each PhD student has a supervisor who guides you through the learning process, is normally an active researcher in your field of study, and who is in charge of your progress and assessment. So in essence, your boss! You will also have a mentor. A member of academic staff outside your field of study whom you can go to with other problems; like when your supervisor, how can I put this delicately, is being… unreasonable.

During the first few weeks there is unfortunately a number of mandatory administration classes/meetings that you will need to attend though very little useful information is gleamed from them. For this is suggest you talk to the second year PhD students who will have recently gone through the same process but will have found their feet and understood their role (hopefully).

The first task is to talk to your supervisor and decide on a topic area, this is usually something discussed at the application stage however a little clarification at the star is never amiss. Your job over the next term will then be to research already published results/theories in this area and write a literature review on your findings. Although it may sometimes feel like a waste of time it is a great way to get information about your subject area and in many cases will form part of the introduction to your final thesis at the end of your PhD.
In my literature review I discussed the origins of understanding the atmospheres of our solar system of planets and moved onto the methods we use to investigate those extrasolar worlds. During my research I read many conflicting opinions on data interpretation and found out which planets had already been investigated and the findings from those observations. It is very important to understand and know what has already been done and to what extent as the real aim of your PhD will be to contribute new findings/theories/interpretations in your field.

Having completed my literature review I have now moved onto processing observational data in the hopes of furthering my understanding of my chosen field of study and to for a basis for my own unique work in the future.

I hope that gives you a rough idea of the first steps of a PhD hopefully I will be able to give more insight as my journey as a PhD student continues.
Posted by Hannah Wakeford at 00:22 No comments: 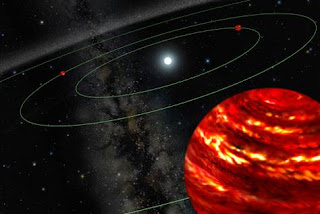 With the increased volume of exoplanets being discovered we are able to put our own solar system into context with observations that still baffle even the most seasoned astronomers. But what do we really know about these worlds and there always be more to learn?

Since the first exoplanet was discovered orbiting the main sequence star, 51 Pegasi, in 1995 via radial velocity measurements a whole host of stars have been found to have their own orbiting planets.
A number of different methods of discovery have radically expanded the field of exoplanetary science. There are now over 600 known exoplanets and over 1000 more potential planetary host candidates from the KEPLER list. By the end of this decade the number will almost certainly be in the 2000 region.
Thus far exoplanet discoveries have been concentrated around large planets in tight orbits around bright stars. This is because they are the easiest to detect via radial velocity measurements or observed in transits, the two most lucrative techniques so far.

These two methods; transmission spectroscopy and secondary eclipse, allow for further classification of exoplanets. Though these methods have been exploited on only a handful of known exoplanets thus far, future measurements and observations will bring understanding and context to our currently unique solar system.

Image from MSNBC media
Posted by Hannah Wakeford at 16:11 No comments: