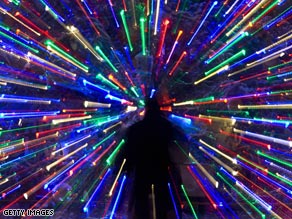 The wonder of what lies beyond our horizon has always been at the front line of human discovery. In just a few hundred years the distance to that horizon has been exponentially increasing; from ships at sea to the furthest reaches of our observable universe.  But what of our mental horizons; are we approaching the precipice of discovery that could cause a paradigm shift in our psyche?

I have been pondering the affect scientific discovery has had on the way we think, and how it changes our view the world for a while now, and am yet to reach any solid conclusions, or any general consensus. In the last 500 years alone the breath of our scientific knowledge has transformed the world that we live in. But has there been a universal light bulb moment; or is it an understanding through hindsight?

I think the trouble with this question is that scientific discovery is not an instantaneous thing. There is no single moment where the light bulb goes off and a new world is created. There may be a time where you can pinpoint an event, like when Newton produced the final concise laws of motion, or when Einstein wrote down general relativity, but there was a great deal of time before and after that to get the ideas in place and to convince the scientific community let alone the general populous that it was real. Newton’s theory of gravity was the end stage of work set up by Galileo Galilei in the late 16th century, and Johannes Kepler in the early 17th century. The stage for Einstein’s theory of both special and general relativity was set with both experimental and theoretical work by a number of prominent scientists in the early 20th century.
Both of these events caused a huge change in the way we observe motion, however, both also suffered from lack of understanding by the general public at the time, and in a great deal of cases a lack of understanding today. Perhaps (if unfortunately) the only way that general paradigm shifts can occur in the psyche of the general public, is the direct observation of a physical phenomenon.

Each new generation grows up in a more advanced world; a world with a greater knowledge of its past and future. However, I fear that not even the proof of life on other worlds will cause a great effect on our psyche; that only when it is staring us in the face on our own turf, perhaps with a gun to our heads, will a paradigm shift occur in the minds of everyone.

What do you think?
Posted by Hannah Wakeford at 08:30