The world has lost a great man tonight and I am saddened by the loss of a personal hero. He was not only a great pilot and unforgettable astronaut, but a man of integrity who, when he found he could no longer do the job asked of him, left with integrity and grace in the pursuit of personal fulfilment and happiness after many years of honourable service to his country and to his planet.

Neil Alden Armstrong was born on August 5th 1930 in Ohio. He is famous for being the first man to walk on the surface of the moon and uttering those undying words,


"One small step for man, one giant leap for mankind"

But he was also so much more.

Armstrong started flying when he was just 8 years old and at the age of 15 achieved his pilots licence before he could drive.


"Pilots take no special joy in walking, Pilots like flying"

He joined the United States Navy and served as a pilot in the Korean War and was awarded the Gold Star, the air medal, the Korean service medal and engagement star.

After leaving the Navy he returned to college where he received a bachelors degree in Aeronautical engineering and met his first wife Janet. He then became a test pilot for the National Advisory Committee for Aeronautics (NACA) the predecessor to NASA. His test flights while at Edwards Air Force base go down in test history folklore.

In 1958 Armstrong was selected for the Man in Space Soonest program run by the U.S Air force and in 1960 was part of a selected group to consult on a military space plane project. on March 15th 1962 he was named as one of six pilot engineers who would fly the space plane on completion.

It was his friend Dick Day, who slipped Armstrong's Astronaut application form into the pile at NASA after he handed it in late, that got him into the astronaut program which he joined on September 13th 1962. He was one of two civilian astronauts selected for the program.

Three years later Neil Armstrong was announced as the Command Pilot for Gemini 8 it was to be the first ever docking between two spacecraft which was successfully completed after 6.5 orbits. Gemini 8, however, came into some trouble when the Orbital Altitude and Maneuvering System failed and the mission had to be aborted.

As a Gemini veteran it was no surprise to Armstrong when the Apollo lunar mission astronauts were announced. Armstrong started as the back-up crew for Apollo 9, however, complications and the standard crew rotation system meant that Armstrong would command Apollo 11 which he was offered on December 23rd 1968.

Apollo 11 launched on July 16th 1969 from the Kenedy Space Center in Florida and along with Buzz Aldrin and Michael Collins he made his way towards the moon.


"I think we're going to the moon because it's in the nature of the human being to face challenges. It's by the nature of his deep inner soul... we're required to do these things just as salmon swim upstream."

During the landing sequence Armstrong noticed they were heading towards unsafe terrain and took over manual control of the Landing Module. In an effort to find a safer landing site thefuel level became a worry and with just 40 seconds of fule left the Eagle landed on the Lunar surface at 20:17 UTC on July 20th 1969.
Not wanting to wait in the LM Armstrong and Aldrin informed command that they would be taking the space walk earlier than scheduled. Armstrong set his boot on the surface of the moon at 02:56 UTC on July 21st 1969 and the famous words echoed across the globe.

After the return to Earth the Apollo 11 team were paraded around the world as part of a 45 day "giant Leap" tour which took its toll on Armstrong who did not particularly enjoy the limelight.

After Apollo 11 Neil Armstrong did not fly in space again and moved around different administrative positions at NASA until he quit in 1971.

Armstrong went back to University where he accepted a teaching position in the Department of Aerospace Engineering at the University of Cincinnati where he worked until 1979.

Armstrong kept a private life away from the press and refused requests for autographs. He has, however, been a part of each reunion of the crew every 5 years and remained a strong adviocate of manned missions stating that he would happily take command of a manned mission to Mars in the future.

Sadly this will not be the case, however, he ramains an inspiration to the young and the old. Although I was not alive in 1969 to see the moon landing each time I see those picture and hear the words spoken from the surface a great sence of pride at our reach towards the stars and our quest for exploration is reinforced. The Apollo program is and will be an inspiration for generations it is the example of science and exploration uniting the world and the reluctant and humble hero will always be remembered.

At the age of 82, due to complications from heart surgery earlier this year, Neil Armstrong, the first man to walk on the moon, died. August 25th 2012.

His family have a simple request: look at the Moon, think of him, and give him a wink


"The important achievement of Apollo was demonstrating that humanity is not forever chained to this planet and our visions go rather further than that and our opportunities are unlimited." Neil Armstrong (1930-2012) 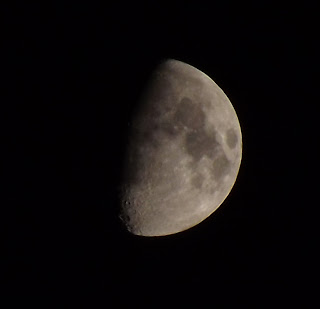 Posted by Hannah Wakeford at 23:27