The International Space Station: What, When, and Why?

The International Space Station (ISS) is our very own flying city and a truly international scientific and technological collaboration. It orbits the Earth once every 90 minutes meaning that in one day it will see 16 sunrises and sunsets. Its orbit is offset at 51.6° to the equator meaning that it covers over 90% of the Earths populated area. The ISS can be easily seen in the night sky and it is always fascinating to look up and see it passing overhead as you only have to look up and think “there are people living on that right now.” You can track where the ISS is using NASA’s ISS tracker (here).

The ISS is a habitable satellite in low earth orbit (370 – 460 km up) and it is the largest of its kind surpassing that of its predecessor MIR in both size and duration of habitability. It has been continuously inhabited since 2000 by crews of three to six people form 15 different countries. The ISS is a collaboration of five different space agencies; NASA (USA), CSA (Canada), RFSA (Russia), JAXA (Japan, and ESA (European), with the European Space Agency funding coming from 11 European countries; UK, France, Spain, Germany, Italy, Denmark, Norway, Sweden, the Netherlands, Switzerland, and Belgium.

The ISS is a modular satellite constructed out of over 100 individual parts that fall into four different categories, canisters and spheres, triangles and beams, solar panels and radiators, and cranes and robotic arms.

Canisters and spheres are the larger modules that are used as working and living quarters. There are 14 different pressurised modules on the ISS one of which is Cupola, a seven window observatory used to view the Earth and docking spacecraft.  Imagine the design of turret on the Millennium Falcon and you will get a good idea as to what it looks like.

Triangles and beams are used, much like on Earth, as structural components of the space station. A long beam, the integrated truss structure (ITS), forms the backbone of the station which is made up of lots of triangles like that seen on large bridges. The ITS is 108.5 m long and forms the mount for the solar panels and radiators.

The ISS has eight large solar panel arrays each 73m long (2247 m2) that collect sunlight for electrical power. Each array has two blankets of solar sails that are mounted on telescopic masts which are able to extend and retract as well as fold. They are also mounted on a gimbal which allows them to rotate to face the Sun so that the maximum amount of energy can be generated. In the sunlight the ISS can be exposed to temperatures of over 200°c this combined with the heat all of the instruments on board means that there also needs to be a system in place to keep the station cool. This is done using large radiator panels along the outside of the stations main structure and along the ITS.

Last, but certainly not least, the cranes and robotic arms. The main robotic are on the ISS is Canadarm 2 whose counterpart, Canadarm 1, is on the Space Shuttle (now retired).  Canadarm 2 is used for station docking as well as module manipulation during the assembly of the ISS. There are also two Russian cargo cranes which are used during EVA’s to move the crew around outside the station. 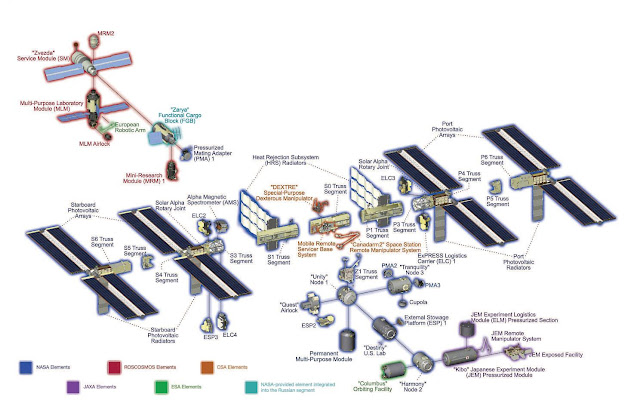 WHEN was it made?

The first section of the ISS was launched into orbit on November 20th 1998 perched on the nose of a Russian Proton rocket. It was a pressurised functional cargo bay called Zarya, which is Russian for sunrise. It was not until November 2nd 2000, that the first ISS crew docked with the station where they lived and worked for 136 days. Expedition 1 crew was commanded by Bill Shepherd (NASA) with two Russian cosmonauts Yuri Gidzenko (Soyuz commander) and Sergei Krikalev (Flight engineer). Shepherd kept a log of the “shake down” crew’s time on board the ISS and they can be found here.

The ISS has now been inhabited for a total of 4314 days (25/8/12) out of its 5027 day life time. The current crew on-board is Expedition 32 which is a 6 member crew who docked with the station on July 17th and will remain on-board until the Expedition 33 crew relieve them in November later this year.

Since the launch of the first module there have been 125 launches to the ISS (as of July 2012); 81 Russian vehicles, 37 space shuttles, three European and three Japanese vehicles, and one US commercial vehicle. The first commercial vehicle to dock with the ISS was launched on May 22nd 2012, by the private U.S. company SpaceX their module, The Dragon, is hoped to have been the first in a number of commercial supply runs to the ISS with commercial space ventures playing a vital role in future missions since the decommissioning of the Space Shuttle last year.

The ISS is now complete and is set to serve out its mission lifetime until 2020 with some hope that the mission will be further extended until 2025-28 when it will be de-orbited.

WHY is it there?

Microgravity has many benefits for experiments and research that can only be conducted on the ISS due to the stable long term environment. For example in microgravity atoms and molecules act differently allowing them to form near-perfect crystals. These near perfect crystals can be used to create better superconductors, which are used in MRI machines as well as many other technologies. Near-perfect crystals can also be used in pharmaceuticals to create better more efficient drugs to fight disease.

Another effect of microgravity can be seen in combustion due to the affect it has on air turbulence. In microgravity conditions cleaner and more effective combustion techniques can be found which may help in reducing pollutants on Earth and increasing the output of power that we get.7

Each day of an astronauts time on the ISS is planned in advance (sometimes by years) and mostly by anyone other than the astronauts. NASA astronaut Sandra Magnus recorded a journal whilst part of the expedition 18 crew describing a typical day on the ISS that is scheduled down to when they can sleep and eat their meals as well as perform their scientific duties (Sandra Magnus’ Journal).

In her journal Sandra describes her regular exercise routine; this is a very important part of an astronaut’s day as prolonged exposure to a weightless environment can have serious effects on the human body. The astronauts themselves are part of an experiment to understand the aging process as the weightless environment causes a reduction in bone density similar to that caused by aging. The exercise helps them retain muscle mass and reduce the effects that microgravity have on their bones.

You can go on a tour of the ISS with NASA astronaut Mike Fincke where he explains the use of the different modules and shows you the ins and outs of life on the Space station.

There are a number of fantastic sites about the International Space Station that are full of information if you want to find out more.

How Stuff Works takes you through the functions of the ISS - http://science.howstuffworks.com/international-space-station1.htm

ESA’s building the ISS takes you through a picture time line of the stations construction - http://www.esa.int/esaHS/SEMG36NSNNG_iss_0.html

Posted by Hannah Wakeford at 18:40