Turning out the lights


What is stellar occultation and how does it tell us about the atmosphere of the solar system objects? 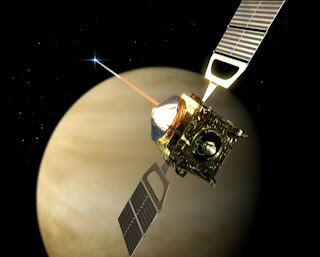 Littered across the sky are our very own atmospheric probes in the form of bright shining stars. On the occasion that these stars are obscured by an intervening body its absence can often tell us more than its previously visible twinkling light. As an object passes in front of the star it obscures the light, if that object has and atmosphere then the light will not be blinked out instantaneously but its light will refract through the atmosphere causing the light to slowly drop off.

The most famous stellar occultation study resulted in the discovery of Uranus’ ring system in 1977. In the picture you can see the time series of observed light as a star is obscured by a ringed planet. As the star passes behind the rings the light is attenuated by the material, this can tell us about the structure of the rings, whether there is more than one or if some parts of the ring system are thicker than others obscuring more light from the star. The star then re-emerges the distance between the ring and the first obscuration of the planet can tell us about the orbit and symmetry of the ring system, given a known motion of the planetary body. As the star passes behind the planet the light is refracted through the atmosphere imposing its molecular signatures on the light observed from the star. In 1952 observations of σ-Arietis as it was occulted by Jupiter revealed that the upper atmosphere of Jupiter is rich in Hydrogen and Helium, confirming previous predictions. When the star lies directly behind the planet a flash of light is often observed. This central flash is caused by the light from the star being refracted round the atmosphere from either side of the planet creating a halo-like effect that is observed as a general brightening. This can tell us information about the lower atmosphere of the planet. As the star then continues past the center of the planet the light is refracted from only one side of the atmosphere and a symmetric increase in light is observed until the star fully re-emerges.

Using observatories from both the ground and in space many occultation studies have been carried out on our closes neighbours. Orbiting spacecraft sent to these planets have not only been able to corroborate the results obtained from this method they have also used it in-situ to get a closer look at what the planets atmospheres have to offer.

In the case of the dwarf worlds in the outer solar system like Pluto and Makemake stellar occultation’s are an important tool in the understanding the diversity of our solar system. In the case of Makemake no atmosphere was detected meaning that there was a sharp change in light as it passed in front of the star, unlike the situation is previously described. But detecting no atmosphere is still a result and helps with formation models and an understanding of the extremes of our solar system.

If you want to know more about the recent observations of Makemake check out some of the links below.
The Mysterious Case of Makemake's missing atmosphere
NATURE - Albedo and atmospheric constraints of dwarf planet Makemake from a stellar occultation


For more on Stellar occultations see
ESA's site for some good descriptions and images http://envisat.esa.int/handbooks/gomos_2_0/CNTR2-1-1.htm
or the Harvard website for previous observations http://tdc-www.cfa.harvard.edu/occultations/

Posted by Hannah Wakeford at 16:53