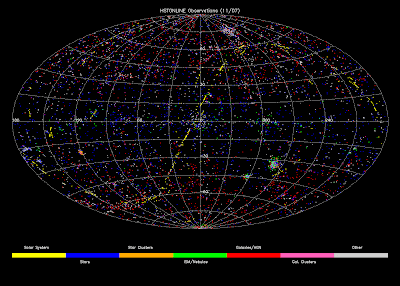 As an observational astrophysicist at some point in your career you will have to write a proposal of your observations to get time on your desired telescope/instrument.

When a call for proposals is sent out the first thing that seems to happen, after a perhaps brief acknowledgement and perhaps a scribble in your diary, is that your forget all about it. After all you have over a month before the deadline so it won’t be a problem. Oh how wrong you were.

Proposals are not as easy to write as you think they might be. Some people have the knack for it but others have a fight on their hands each and every time. You really have to beg, borrow, and steal to get time on a telescope these days. Well not so much of the stealing, or the burrowing, mostly it is just begging lots and lots of carefully worded specific yet vague begging.

The first thing to understand is that your proposal will be sent out to a number of different people. These will be mostly other scientists but most will not work in your field and instead of studying exoplanets they might be specialized in dark matter or something. So you need to bring them up to speed without being in any way condescending, hopefully this is not a hard thing to do.
You have to grab the reader’s attention in the first paragraph or even the first sentence. This is your elevator pitch, where you have the time it takes to get from the bottom to the top floor to sell your idea to a stranger in a lift.

Once you have got their attention you need to quickly get to the meat of the problem that your observations intend to investigate and justify how they will potentially solve this problem. The operative word there is, justify. Why should they give you precious time on their instrument, how is your research relevant not only to your field of research but also to a wider picture.
In our case recently with the Hubble Space Telescope proposals that were submitted on Friday we had to justify our selection of planets that we wanted to investigate further, what was it that made these planets unique in order for them to supply a wider understanding of exoplanetary populations and the environments in which they live.

The most important part of the proposal after you have grabbed their attention is in the figures. Do the images that you have carefully chosen to include contain all of the information that they need to convey? Are the messages clear and the images crisp? Do they tell the reviewer that the investigation you plan to conduct is even possible?

And last but not least. Get someone else to read it! If you cannot sell the idea to one of you colleagues with your proposal you will not sell it to the reviewers. The language will need a few refinements before it is ready to go out. If you have written the proposal with a number of other co-authors make sure that the tone is consistent and it flows from one persons section to the other without substantial gaps or repeats.  In most proposals you will have strict restrictions on the number of pages used for each section or in total so that the reviewers do not have to comb through a 20-page proposal that is only asking for say two days worth of data; so be concise and clear.

The deadline …
Less than ten years ago proposals had to be submitted in paper hard-copy and the deadline was an arrival date at the desk of the man in charge, so depending on your relative to him your deadline becomes very important. As we were clicking the big shiny button to submit our HST proposal my supervisor told me a story of meeting not only the submission deadline but the FedEx deadline so that it would arrive on time. Explaining that if that deadline was missed, as it was one year while he was a PhD student in Tucson, Arizona, the senior PhD student would then have to hop on the Red Eye up to the Goddard Space Flight Center in Maryland to deliver the paperwork.  Luckily proposals nowadays are all submitted electronically, so the deadline is just a frantic communication between the writers and their computer and perhaps a little bit of running around the department to get everything in place.

My advice for those who are planning to go into observational astronomy or who are just starting out; start writing proposals as soon as you can. It takes a while to get the tone and the degree of begging at just the right level while also having ideas that spark interest in others inside and out side your field of study.
Good Luck! POST IMAGE from the MAST online data archive showing the HST usage in 2007
http://archive.stsci.edu/hstonline/images/bighstonline.png
Posted by Hannah Wakeford at 15:59