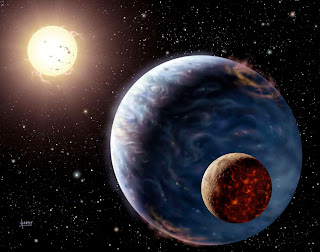 The first exoplanet was discovered in 1992. This discovery was unexpected in many ways, first the
planet is in orbit around a pulsar, a highly magnetized stellar remnant from a supernova event, but also because there were not looking for it. The search for exoplanets had been actively investigated since the late 70’s but no one was looking around dead stars. It was not until 1995 that the first exoplanet was discovered around an ordinary main sequence star and that presented some surprises of its own.

The first exoplanets discovered were labelled ‘Hot Jupiters’. These planets, although similar in radius to Jupiter, orbit their stars so close that they are tidally locked in place with one side in permanent daylight and the other in perpetual darkness. The close proximity to their star means it can get incredibly hot. The hottest thus far is WASP-12b with a dayside temperature of around 2,500°C that is hotter than some stars*. This orbital distance also means that a year on these worlds is just a matter of days allowing us to take multiple measurements of the planet and the star over short periods of time.

Since 1992 over 870 exoplanets have been discovered. As of today, April 28th 2013, there are 872 planets in 683 stellar systems (exoplanet.eu/catalog). That is an average of 41.5 new planets
discovered every year for the past 21 years, and that is just in our neighbourhood within a tiny portion of our galaxy. 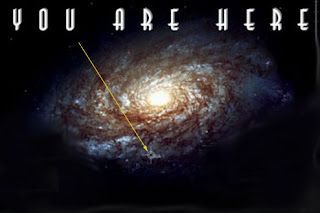 There are potentially hundreds of billions of planets in our galaxy. Thanks to surveys like Kepler, WASP and HAT (just to name a few); we can work out how many planets there could be orbiting other stars that we cannot yet detect.  And it comes to a mind-boggling number considering just over 20 years ago our solar system seemed like an anomaly but it is not an easy thing to do.

It’s like looking for a flee passing in front of a street lamp over 1km away. Each of the surveys I mentioned above look for the planet as it transits its star. This means they monitor the starlight over a long period of time and look for characteristic dips in the light, which indicate that there is something periodically blocking out a small part of the star. From this we can determine the radius relative to the star, with the frequency of the transit giving us the orbital period.

The closest exoplanet to us is Alpha Centauri Bb. Although it orbits the Suns closest star at just over 4 light years away it was not discovered until 2012 as it has such a small influence on its star. Alpha Cent Bb was discovered using radial velocity measurements (link to other blog post) and from this we can calculate its minimum mass to be just slightly higher than that of the Earth and 96% closer to its star. So it is not a potential holiday destination and even with current technology it would take us  years to get there.

Just 10 worlds have been discovered where liquid water could exist on their surface. The Planetary habitability laboratory, from the University of Puerto Rico at Arecibo, has been cataloguing those worlds that lie in what is popularly called the goldilocks zone. The region around a star where the temperature is just right for liquid water to be able to survive on the surface, assuming the planet has a ‘surface’ as we know it, and its atmosphere is just right to sustain its presence. We can get some of this information by working out the bulk density of the planet.

The bulk density of exoplanets ranges from Styrofoam to solid lead. If we can measure the minimum mass of the planet through radial velocity, and the radius of the planet through its transit, we can calculate the bulk density of the planet. This allows us to draw some conclusions as to its likely composition; however, we are still just making educated guesses at this point as materials will act differently as you change the conditions. The Earth’s bulk density for instance is 5.5 g/cm3, somewhere between Iron and silicon, which would lead us to conclude that it is a rocky world.

No exoplanet is exactly like another. Like our solar system there is a wonderful and surprising diversity of different worlds out there. From their radius, mass, and density; to what we have been able to detect in their atmospheres. We have even detected a planet losing some of its atmosphere due to extreme stellar activity**, and planets orbiting multiple stars***. The discovery of exoplanets has really tested each of our imaginations about what is possible.

Our solar system still holds the record for total number of planets. There are 130 multiple planet systems found so far. The largest have six planets; Kepler-11 (b,c,d,e,f,g), HD 10180 (c,d,e,f,g,h), HD 40307 (b,c,d,e,f,g). And these are just the planets we can detect, with only 20 years of practice and technology development behind us. Imagine what other worlds these systems might hold that we cannot yet see, or any other systems and stars for that matter.

For your bonus 11th fact.

Aliens are out there. More than just letting the statistics speak for itself, we have found some startling evidence on our own planet to suggest that life is not impossible but probable. New studies are popping up everywhere into astrobiology and the potential for life in the most extreme of environments.

The possibilities appear to be endless.

*Red star range in temperature between roughly 800-3500°C
**HD 189733b had a portion of its atmosphere blown off due to an x-ray stellar flare event that was monitored using ESA's XMM-Newton X-ray space telescope, while a transit of the planet was observed in the visual with NASA’s Hubble Space Telescope, showing a large atmospheric tail in the planets wake. (http://arxiv.org/abs/1206.6274)
*** Planet Hunters: Transiting circumbinary planet in a quadruple star system (http://arxiv.org/abs/1210.3612)


There is also this great interactive exoplanet catalog based on the XKCD comic (http://xkcd.com/1071/) where you can find out some things about the diffrent planets. - http://codementum.org/exoplanets/

Posted by Hannah Wakeford at 19:48 No comments:

Why is the Sun yellow, the sky blue, and the clouds white?

A few weeks ago my 4 year-old nephew asked his mother why the Sun was yellow. Of course this got passed on to me, and I found myself trying to explain the wave nature of light to a bemused toddler in a moving car while turned around in my seat.

To a 4 year-old color is very important, hey it’s still important twenty years later.
To understand why the Sun is yellow, the sky blue, and the clouds white we first need to understand how color works.

Just like waves on the ocean, light will always travel in straight line; that is until something gets in its way. It then has three options,
Reflected
Refracted (or bent)

Each of these mechanisms can be seen as a result of the Earth getting in the way of the Suns light as it makes its way out across space, but as you will see it is predominantly the scattering of sunlight that produces the colors of the Sun, sky, and clouds as we see them.

If you were to look at the Sun from space without Earth’s pesky atmosphere in the way it would actually look white, shortly before your eyes are burnt out. Even solar astronomers are in denial though coloring the sun yellow or orange in a number of their space based observations. We humans are creatures of habit after all.

As light enters our atmosphere it is interrupted on its journey by particles of gas. These particles are much smaller than the wavelength of the light that it is interrupting. This results in something called Rayleigh scattering. Rayleigh scattering resorts in the light being redirected on its path towards the surface and is strongly wavelength dependent. Meaning that the shorter the wavelength, or the more blue the light is, the more it is scattered, while the longer the wavelength, the more red the light is, the less it is scattered. Leaving the sky its beautiful blue color.

That beautiful blue sky is accompanied by a strange yellow orb so bright that you cannot look at it directly even under the protection of our atmosphere. The reason for its vibrant yellow color is directly related to the blueness of the sky. As the atmosphere scatters out the blue light the remaining spectrum of the sun is shifted towards the yellow part. As the Sun moves towards the horizon at sunset the light passes through more and more of the atmosphere. This means that more and more of the shorter wavelength light is scattered away making the Sun appear redder as it sets in the evening.


If you live in the UK, like I do, you will most likely be disappointed by the amount of time that the bright sunshine and the beautiful blue sky is blocked by big white fluffy looking objects.
No not sheep, but clouds.
Clouds are drops or frozen crystals of water and other chemicals in the Earths atmosphere. These droplets or crystals scatter the light in all directions regardless of the wavelength making them appear white. Dark clouds are created when they pass into the shadow of another cloud, or when the top of that cloud casts a shadow on its own base. They also look darker in contrast to a brighter sky. So a dark cloud will not always mean rain. Though if you are in the UK it is the most likely result.


Other than scattering and reflection, we can also observe the refraction in the atmosphere. As larger droplets of water bend sunlight a rainbow forms. They appear in the sky opposite the sun as the light is bent entering water droplets in the air and then reflected inside the back of the droplet. This refraction, like in a prism, causes the light to be split into different wavelengths and thus different colors; red, orange, yellow, green, blue, indigo, violet.  Reflecting the light multiple times inside the water droplet can create double rainbows, where the order of the colors are reversed.

Although our vision is restricted to just a tiny portion of the whole electromagnetic spectrum the wave nature of light puts on remarkable displays for all to see. So look up and enjoy the show because, hey, even on a cloudy day the light is dancing.

Posted by Hannah Wakeford at 19:04 No comments:

What I learnt from the EOS exoplanet Workshop


Last week I spent some time in Anzere, Switzerland at a small collaboration workshop looking at Exoplanet Atmospheres. We discussed things from stellar variability, to transmission spectra, and model atmospheres.

Like all workshops/conferences/meetings there are some things that you really learn so I thought I would compile some of them for you here. I have also added some of the Pictures I took as it was a truly beautiful place.


And last but not least,

It is not personal, it's SCIENCE!

NOTE: All of the photos were taken by myself and all observations are either paraphrased or my own.
Posted by Hannah Wakeford at 18:47 1 comment: