The Edge – you don’t really know where it is until you fall off. 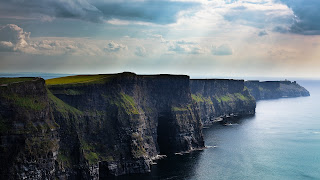 The news about Voyager 1 last week got me thinking about what we define as the edge. While something like the edge of a cliff is well understood, something you perhaps don’t want to be finding out by walking off of it, the edge of other things are slightly more hand-wavy.
Is the need for definition just human natures quest for solid answers, a more refined interpretation of the world around us, or is it always a physical boundary?

Astrophysics is one of those subjects plagued by hand-wavy definitions of ‘the edge’. Stars, atmospheres, nebulae, solar systems, even the Universe itself have only vague definitions of the edge.

The dictionary defines the ‘edge’ as - The outside limit of an object, area, or surface; a place or part farthest away from the center of something.
So with this in mind there is the possibility of multiple ‘edges’ for any one thing.

The Sun and stars for example have a visible surface called the photosphere a layer in the solar atmosphere where light in the visible wavelengths emerges. So this is the inner edge from which light emerges from a star, but where does it stop, does it stop? As you go farther and farther away from a star the amount of light you see will reduce with distance. But there will be no point at which the light will get weaker and stop. This gives the stars an inner edge but not an outer one.
“Ahhh, but…!” I hear you cry. Electromagnetic radiation is not the only defining physical parameter associated with stars. What about their gravity, how do we define the edge of a stars gravitational influence? 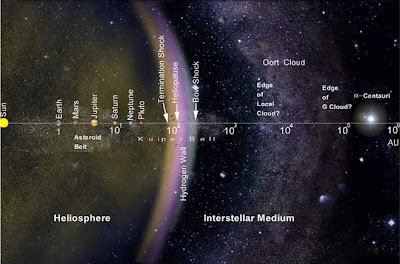 Again this has no defined edge. As you increase your distance from an object the effect of its gravity diminishes but does not completely go away. In fact it follows a simple inverse square law meaning if you double your distance the gravitational pull of the object reduces to ¼. For an object like you or I this means very little but for something as massive as the Sun it can have far reaching consequences. A more common definition of the edge of the Sun’s gravitational effect is when that of another star takes over. For our Sun this stretch’s out way beyond an expanse of icy bodies called the Oort Cloud over 100,000 AU from the central star or over 1.5 light years. That is 1.5 times the distance light can travel in one year, and light travels really fast.

So if light has no outer edge and neither does gravity what is it that separates us from interstellar space?

This leads us to another edge. Formed by the separation of one magnetic region from another, producing a physical boundary to an otherwise handwavy realm.
The sun’s magnetic field.
While planetary magnetic fields like the Earth’s are shaped by the solar wind, causing a tadpole like tail in the magnetic field to drag behind the dark side of the planet, the Sun’s is relatively spherical forming something called the heliopause. This is the edge that defines the boundary between our Sun and interstellar space.
It is this giant magnetic bubble, this defined edge, which Voyager 1 has been attempting to breach, trying to reach out a human hand into interstellar space.

This is the edge. Voyager 1 marks the edge. The edge of humanity as it endeavors to explore the
unknown. Voyager 1 is the farthest from the Sun any man-made object has ever been and it will continue on its journey into the reaches of the solar system long after we are able to communicate with it. Maybe one day we will go pick it up but until then it will continue to test the boundaries of our Suns influence on its profound voyage from the Earth.

Next step the edge of the universe. Whatever that may be.

What’s Next?
There have been some great articles about Voyager 1’s journey but I think these two really speak to the facts the most.

NASA JPL – How do we know when Voyager reaches interstellar space?
http://www.jpl.nasa.gov/news/news.php?release=2013-278

I hope you had fun let me know what you think by leaving a comment.
Thanks.