Over the past week I have delved into the life of a ground based astronomer in an effort to gain some practical knowledge of the instrumentation involved and an understanding of the observing process.

Having previously work only with space based data – and as they refuse to send me to see one of those in action – this was my first time seeing a professional telescope.
During the week I was able to observe with both Subaru and the James Clerk Maxwell Telescope (JCMT), two vastly different telescopes all in one glorious place. That place, Mauna Kea.

Mauna Kea is one of the worlds leading observatories with 13 telescopes covering the near UV through sub-millimeter out to radio with contributions from 10 different countries it is a true collaborative effort.

After acclimatizing to the advanced altitude at Hale Pohaku astronomer center, which sits at 2800m on the side of Mauna Kea, you head up to the Summit, a further 1400m above sea level. This altitude gives the mountain ideal conditions for observing sitting above the lower cloud deck and surrounded by cool dry air you get a nearly unobstructed view of the universe.

Well at least in theory!! 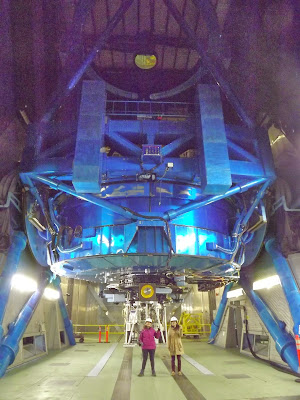 On my first observing night I joined some of our collaborators on the Japanese Subaru telescope. Subaru is one of the largest telescopes on the mountain and contains the largest single mirror reflector measuring 8.2m across.
In true Japanese style it is a technological and engineering marvel. Our technician for the night, Daniel Birchall, described it as and over engineered playground for the technicians. As a result it is quite a hands off telescope for visiting observers, apart from the full on tour you can take before the sunsets and you get to see all of the robotic arms and instruments that control this ginormous ‘scope.
The observations that we were taking with Subaru were not only time dependent, as we were observing the transit of an exoplanet, but also required very high precision measurements. So a clear sky is critical.
Unfortunately that night the clouds decided to roll in and with exposures of 15 minutes per image any breaks in the cloud would end up being combined with those of a cloud free sky.
Over the course of the 12 hour observing shift we eagerly checked each of the exposures for the maximum count level hoping that we would collect enough photons to do some science with the data. I think in the end we just about got there, but only just.

While I was up observing with Subaru another observer with the University of Exeter was heading up to do her own observations on the JCMT, and she kindly offered to let me tag along for a few nights and take a look. While the science they do is not in my specific field of study it is a great idea to get a look in at how they take their data and operate their telescope to expand your understanding of the instruments that can be used for astronomy. 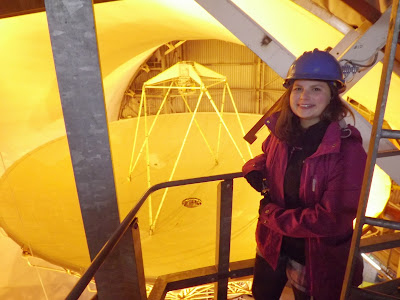 Now in contrast to the over engineered telescope of Subaru the JCMT is a different kind of engineering marvel. There is something beautifully British about the whole thing and it is one of a kind in the sun-millimeter astronomy world. JCMT is a 15m dish sitting inside an enormous dome in what is called sub-millimeter valley on the summit of Mauna Kea. From the giant dish to the control room that rotates along with the telescope it appears as if it is from a different time and has a fantastic cobbled together space junk feel to it, like something out of Firefly.
Now unlike Subaru’s measurements clouds would not be too much of a factor for JCMT, however, what we got over the next two nights was. Humidity.
The top of Mauna Kea was shrouded in fog! And with the humidity over 95% we could not even open up the dome.
On the second night our support astronomer, Will, lit up the inside of the dome and walked me through how they take measurements but setting up a mock observation. This let me see how the entire place rotated along with the telescope and how the instruments are all aligned with the dish by moving the secondary reflectors. The best thing about it was that I now had a better understanding of the work my old office mate does and after 2 years of learning about it from her the final pieces clicked into place.

I think the Brit in me liked the industrial feel of the JCMT, but I certainly look forward to getting to use the Subaru telescope for transit observations in the future. Hopefully with better weather conditions.

Posted by Hannah Wakeford at 19:37 No comments: